It was my first time flying Korean Airlines recently and I was impressed by what they offered on-board for their meals. Flying to Cambodia we were offered dinner and you get your usual choices of chicken, beef or fish. This is pretty typical for most airlines and I'm not usually a fan of airline eats but I was surprised by how tasty and filling their meals were. Being Korean they also give you a good amount of side dishes with your meal, which is a norm in their culture, and to top it off warm bread which I covered with the Anchor New Zealand butter they served (another plus for me!).

Coming back from Hanoi we were offered breakfast. The variety they gave us included traditional hot cooked breakfast (omlette), korean style breakfast (beef porridge) and an option that included fish. Again, this meal did not disappoint. I wish I had taken photos to show you all how great the display was as well. I guess you'll just have to fly with them to find out!

Flying between Asian countries I do usually go for the cheaper budget airlines first but this airline turned out to have a great deal and was only a few dollars more expensive than the likes of Air Asia. I lucked out in this deal being a direct flight, offered checked-in luggage, given on-board entertainment and delicious on-board meals. A+ for Korean Airlines.


Visit CheapOair.co.uk for Last minute flights.
Posted by KMPA at 10:53 PM No comments:

I wanted to do a separate post just for this accommodation chain as I was extremely impressed by the service and standard of quality of this place. Not only were they highly accommodating and helpful but the quality of the rooms and the overall property was very clean, quite new and the decor had a homely feel to it, which is nice to come back to especially when you've been living a nomadic lifestyle for a while.

There are three Little Hanoi’s situated around the city of Hanoi; two hostels and one more boutique-style hotel or flashpacker closer to the heart of the city. We had just arrived into the city having spent two nights on a train travelling from Ho Chi Minh (Saigon). It was about 6am and all we wanted was a room to relax in for a little bit and a nice, hot shower. We had found Little Hanoi Hostel 2 via online search and after seeing some good reviews we decided we would try our luck here. Things didn’t look too promising when we turned up and the reception was closed and two of the staff members were sleeping on make-shift beds out of couch pillows on the floor of the restaurant adjoining the reception.

Luckily internet was free so we managed to pass our time catching up with friends online until someone woke up. The reception staff didn’t officially start until about 7am but once they did it was all uphill from here onwards. We hadn’t made any reservations and were hoping dorm rooms were free. Unfortunately the lady at reception informed us that all dorm rooms were full for the night (cost of a dorm bed is about USD$7). She did mention that a private room for three cost only $27 but we had to wait until 9.30am to see if it was available. Due to our inconvenience (which there was none as we were the ones who had not made any bookings) she offered us and the other girls that had just arrived free cooked breakfast. After a delicious meal of bacon, eggs and a fresh baguette she informs us that the private room at this hostel was already booked however they had another property, Little Hanoi Diamond, about 10 minutes away that had a room free. This was a slight grade higher than Little Hanoi Hostel 2 so rooms are generally more expensive so not only did she offer us the same price of USD$27 per night at the new place but they also paid for our taxi to get us to the other hostel. She then proceeded to help us with booking our trip to Halong Bay and our train tickets to Sapa, which can sometimes be confusing to book if you don’t have anyone to help you.

Staff at the second hostel greeted us warmly upon arrival and was very knowledgeable about the area and where the best hot-spots were for anything you asked for. One of the receptionists who worked during the day managed to remember our names as well which I thought added a nice little touch to their service. We were never let down by this hostel chain. Staff was amazing, professional and reliable. They also use good providers for any activities you book through them and are at a decent price.

This is hands-down one of the best places I’ve stayed in so far in my travels. It's hard to explain just how smooth and easy-to-deal with this place was, you just have to experience it for yourself. I cannot rate this place highly enough.

If you are ever looking for a place to stay in Hanoi, I highly recommend staying at one of the Little Hanoi properties as I guarantee you will not be disappointed.


I just wanted to do a quick post and welcome everyone to 2013. Wherever you are in the world, I hope you kick started the New Year in a great way. This was my first celebrating New Years in Seoul, South Korea surrounded by great friends. There are many popular areas in Seoul, each with their own festivities. We decided to spend our night in Hongdae (홍대), one of my favourite areas in this city.

For the night the streets were packed with almost as much foreigners as locals. Trees were adorned with lights, all the stalls were out a little later than usual and street performers entertained the masses before the countdown. Typically, a New Year’s tradition for Koreans is to watch the first sunrise of the year. It is a little hard to do this here but a few friends managed to catch a glimpse in Busan and other smaller towns across the country.

Hongdae is very known for the younger crowd as it is one of the areas that is popular for all the night-goers and as well as being close to Hongik University. Hongdae is actually an abbreviation of Hongik Daehakgyo (홍익대학교), Korean for Hongik University.  This area has great clubs and pubs, as well as a range of restaurants. The area is also known for its indie street arts, underground band musicians and urban street arts. Also, if you happen to be here during a weekend every Saturday (except in winter) flea markets are held on a playground (놀이터) that is in front of the main gate of Hongik University. The flea markets are called the "Hope" and "Free" markets. It is a fledgling craft market of things made by students and street artists.

These are just a few shots from my New Years night in Hongdae, Seoul. How did you spend your New Years? 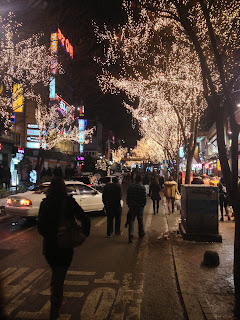